we aim to make a   difference

SEF is keen to advance with low carbon technology and we believe that investment to reduce the environmental impact of our production is essential.

With an annual generation of circa 320000 kWh, we now produce a considerable percentage of the energy we use throughout the packhouse and offices and have significantly reduced our carbon footprint.

We estimate that our new solar array will provide enough energy to satisfy the annual demand of 75 four-bed houses and will take 98 tonnes of carbon dioxide out of the atmosphere each year.

Bring on the Cornish sunshine ! 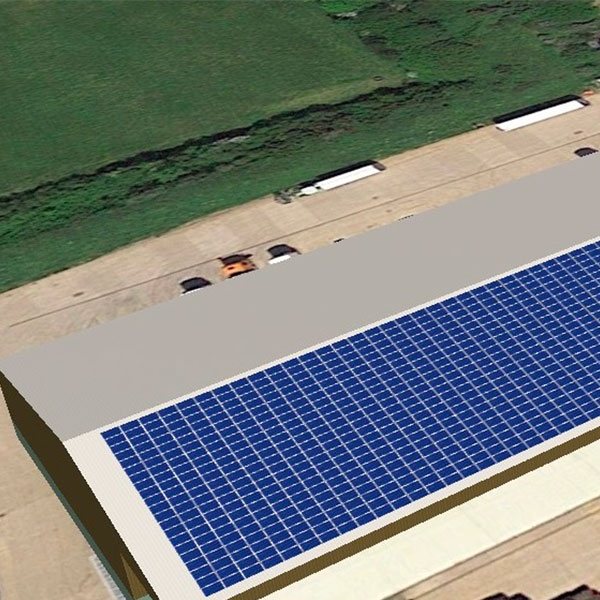 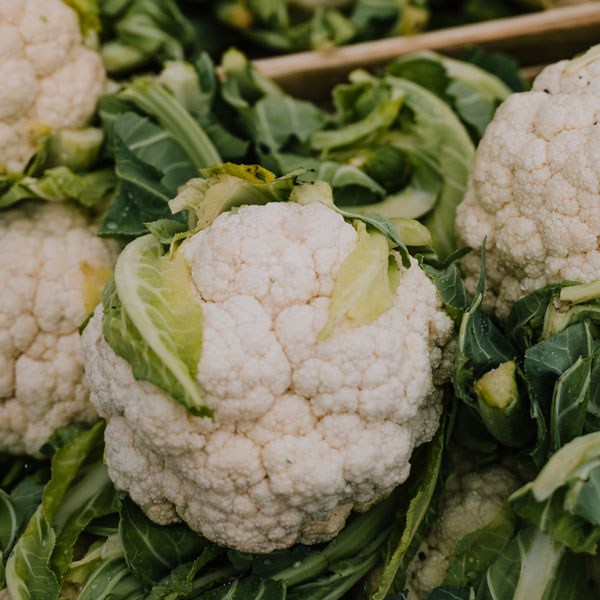 We are always working hard to reduce our waste, and in December 2019 we started working with FareShare and other local charities to redirect some of our surplus produce back into the human food chain, where previously it would have been ploughed in or used as animal feed. Since then we have donated over 223 tonnes of produce to FareShare sites across the UK, equating to 531,190 meals.

“Receiving a regular supply of fresh fruit and veg is vitally important to the charities and community groups we support. By providing FareShare their surplus food Southern England Farms have found a smart solution to manage their food waste that provides enormous benefits to those who are most vulnerable.”

We will continue working to improve production efficiencies and are putting in place new procedures to better measure our surplus and waste as a percentage of production so that we can identify opportunities for improvement.

We are also taking part in a WRAP funded project, as well as our own on-farm trials, looking specifically at reducing pre-harvest losses of brassicas from planting to picking. 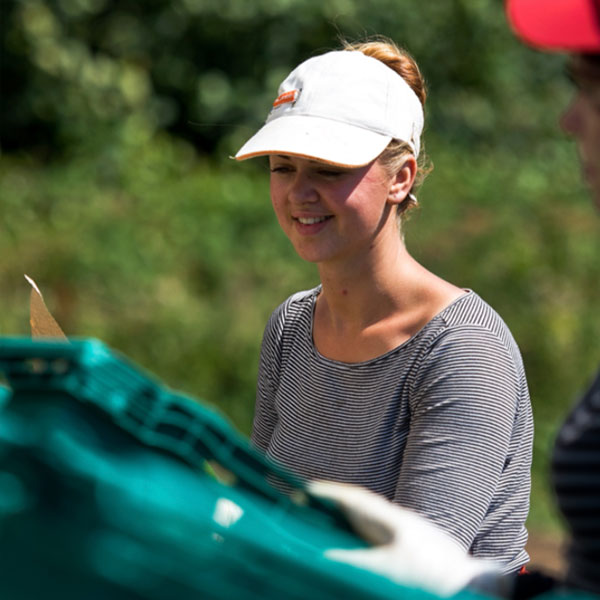 Grown in Cornwall to feed you all 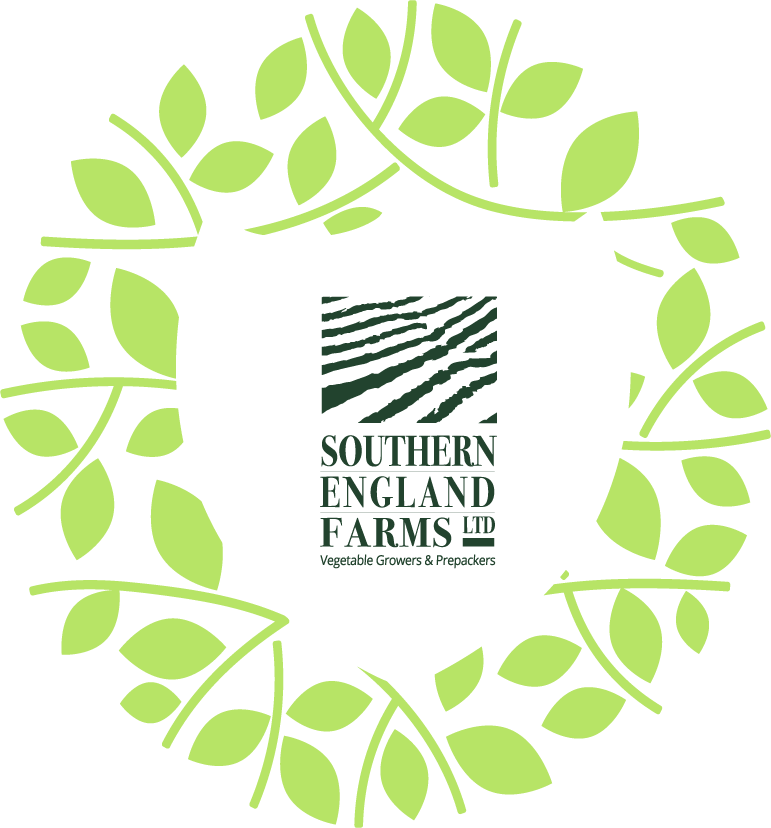 SEF are the reserve Guardian
for ST Erth Pits

SEF are proud to support and sponsor the preservation and upkeep of this wonderful natural habitat. By protecting a key local area we can help to support re-wilding and the conservation of local species native to the area.

St. Erth Pit is Cornwall’s first geological nature reserve. Formally known as Harvey’s Pit, the reserve was originally a clay pit and was worked as such from about 1834 until the early 1950’s.

The clay from the area was highly regarded and even world-renowned St. Ives based potter Bernard Leach frequently purchased it.

The abundant fossil fauna, first recorded at the site in 1881 is dominated by sea snails and molluscs suggesting a late Pliocene date (2-5 million years ago) and the reserve forms part of a Site of Special Scientific Interest (SSSI). It is also a Regionally Important Geological site RIGS).

Wildlife has now invaded the once bare ground of the worked pits and the area is now dominated by semi-mature woodlands, mainly sycamore, grey willow, hazel and holly trees.


SEF are the Reserve Guardian for St Erth Pits, we are passionate about wanting to preserve and protect this diverse and precious nature reserve in the heart of west Cornwall. 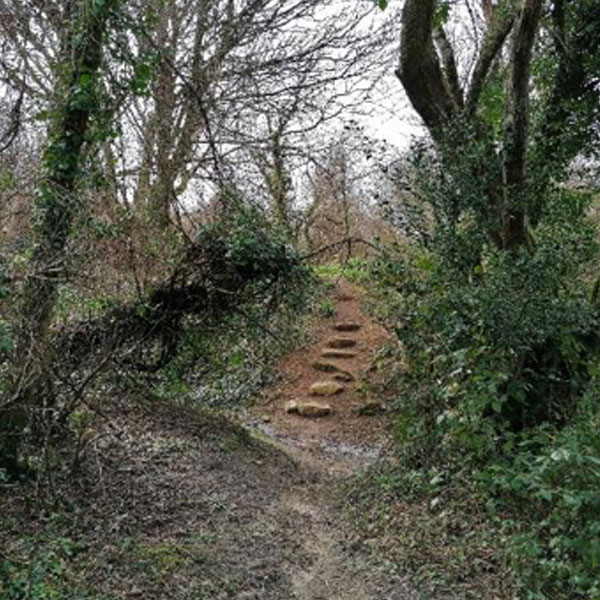 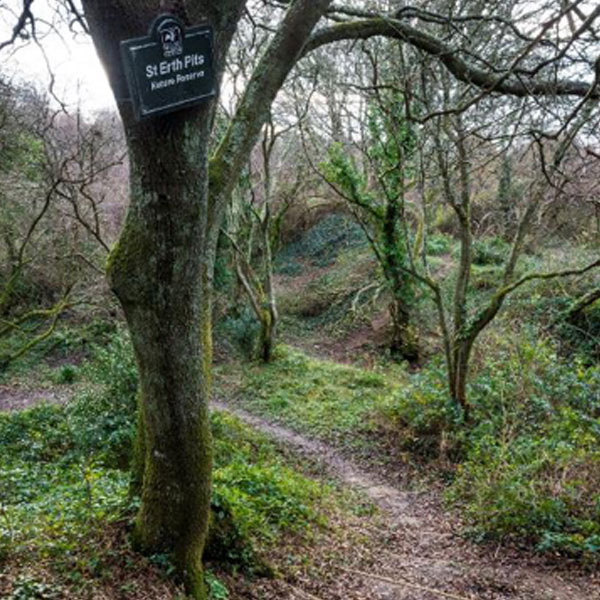 As the clay pit was left vacant and nature came in to fill its void, the site has become a semi-mature woodland. There is a circular walk that takes you through the reserve but please be aware that during winter times it can become quite wet and slippery. Please wear appropriate footwear.

As you walk through this quiet and beautiful reserve you may notice birds such as chaffinches, wood pigeons and blackcaps. Squirrels can often be seen leaping from branch to branch in the canopy and look out for badger tracks in the mud, and black or white tufts of fur caught in the brambles.

During the summer months woodlands are a good place to spot resting butterflies. Two of our most beautiful species, the Peacock butterfly and the Orange tip, can be found here

This remarkable butterfly is easily identified by the striking markings on its wings that look like the eyes seen on a peacocks tail feather.

It is perhaps our most common butterfly and can be seen almost all year round. It likes gardens, where it spends much of its time, but also finds shelter in woodlands and clearings.

When threatened the Peacock butterfly can make a hissing sound by rubbing its wings together. This coupled with the large eyes on its wings can be a good deterrent against predators. Its underside is a dark brown, making the wings look like dead leaves when closed. 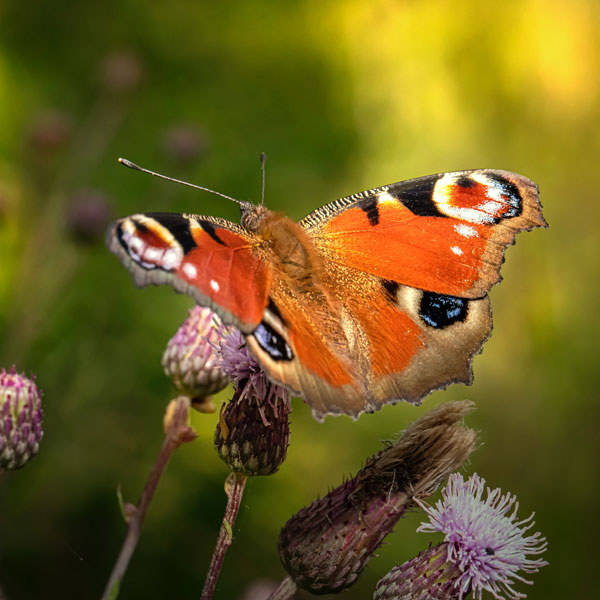 Another easily identifiable species, the males of these beautiful butterflies are white and half of their fore wings are a bright orange. Females are also white but have a grey-black wingtips. Both males and females have a mossy-grey pattern on the underside of their hind wings when at rest.

Orange tips are quite common in the UK. They can be found in gardens, meadows, hedges and woodlands like St. Erth Pit.

The adults like to lay their eggs on hedge and garlic mustard plants as well as cuckooflower to give their caterpillar young the right food to eat. That-said, they can be cannibals, and after eating their own eggshells they will often move onto eat other orange-tip eggs nearby.

The caterpillars will pupate in July and over winter, and emerge as butterflies the following Spring. 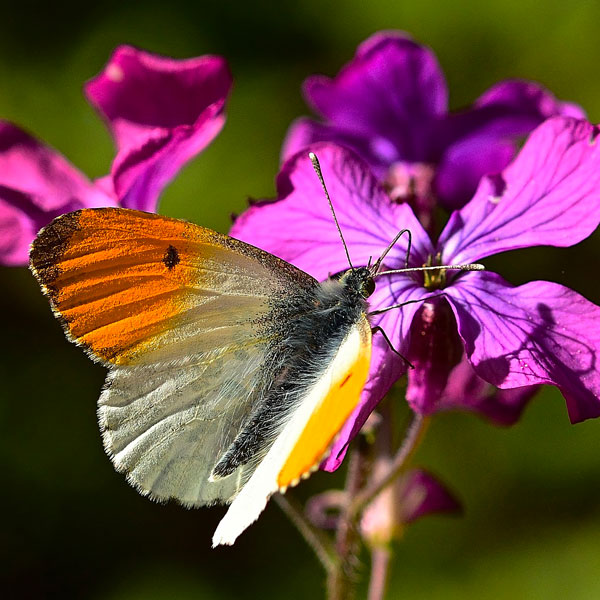 As the name would suggest the male black cap has a black cap, whilst the female has a slightly ginger one. It’s a medium sized warbler and mainly found in woodlands and amongst tall scrub. Once just a summer visitor to the UK, these birds can now been seen all year round, as winter migrants from North Eastern and Central Europe migrate here from around September onwards. They typically feed on insects throughout the summer months and wild berries and fruits during winter. They make their nests in hedges and within brambles and usually lay around 4-6 eggs.

Spotting a blackcap: The blackcap is a distinctive greyish warbler and is about 13cm in length. Its beautiful birdsong has earned it the nickname ‘The Northern Nightingale’. They can be easily confused with willow tits but lack the distinguishable black bibs. 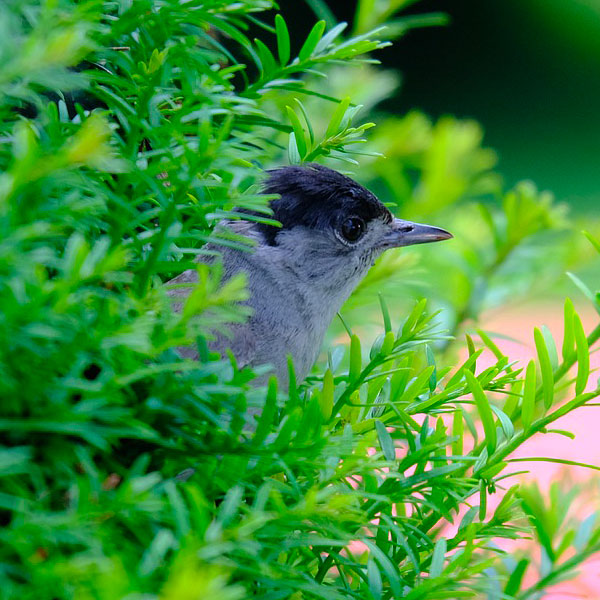 The fossils found here tell us that the clay was laid down in a shallow arm of the sea that would have separated West Penwith from the rest of Cornwall. The waters were as warm as the Mediterranean today, between 10 and 18°C, and reached a depth of up to 10 metres. Sea level at this time was as much as 45 metres higher than it ‘s current level! 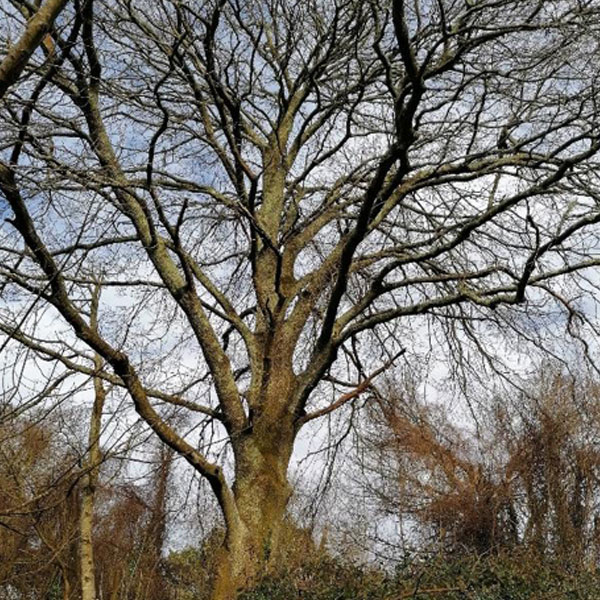 The whole of the reserve has been altered by its use as a quarry first for casting sand and then as a clay pit. Its shape however has been affected by its former land use. Its southern edge was defined by a pre-existing property boundary which also determined part of a field system separating the farms of Lanuthnoe to the South, and Trelissick to the North. These farms are likely to have early medieval origins as Lanuthnoe is an early Christian name for St. Erth Churchtown, and Trelissick a solid Pre-Norman Cornish place name.

The pit appears to have been leased by the Roddas of Trelissick, first to Harvey and Co Ltd of Hayle in 1899 (Hence the name Harveys Pit) and then leased to F.H Abrahams of Mansfield, when it was know as the Cornish Sand Company. It was then taken over by the Holman family from Camborne and worked up until 1948-50. The site was donated to Cornwall Wildlife Trust in 1996.

Apply to work at SEF

Be part of a great team, and experience working in a fun and friendly environment with plenty of opportunities to gain new skills and make new friends. Fill in the form below, or contact us directly for more information on how you can join SEF.